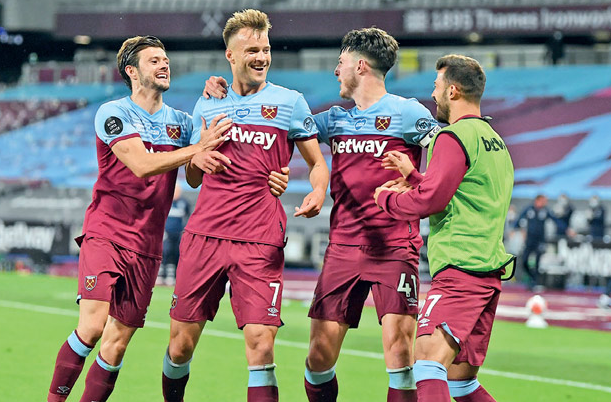 West Ham rocked Chelsea’s top-four hopes and boosted their survival bid with a dramatic 3-2 win, while Pierre-Emerick Aubameyang struck twice as Arsenal climbed back into European contention with a 4-0 thrashing of Norwich last night.

Chelsea were hoping to take advantage of third-placed Leicester’s 2-1 defeat at Everton earlier in the day, but instead the Blues were beaten for the first time since the Premier League restart. West Ham were denied the opening goal at the London Stadium when VAR ruled Michail Antonio was offside as he lay on the ground while Tomas Soucek slotted home. Willian fired Chelsea ahead from the penalty spot five minutes before half-time after Issa Diop tripped Christian Pulisic. Soucek headed home in first-half stoppage time as West Ham finally scored their first goal since the restart. Antonio put West Ham in front in the 51st minute when he slid in to convert Jarrod Bowen’s cross. Willian’s superb 70th-minute free-kick drew Chelsea level, but it was West Ham who broke away to win it in the 89th minute when substitute Andriy Yarmolenko finished a brilliant counter attack. Chelsea are one point behind Leicester and only two ahead of Manchester United and Wolves as the race to qualify for the Champions League hots up with six games left.