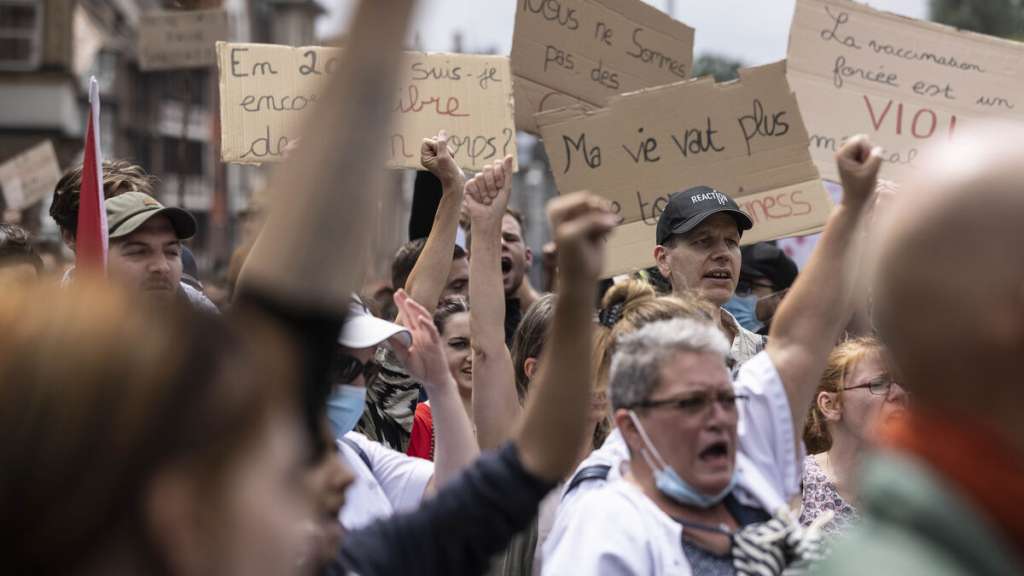 Over 100,000 people protested across France over the weekend against the new coronavirus rules announced by the government earlier this past week.

The controversial measures include mandatory vaccination for health workers and an obligation for citizens to bring in a health pass for most public places. The health pass is given to those who are fully vaccinated against COVID-19 or have proof of a negative test taken within 48 hours. In Paris, one demonstrator’s blouse read “No to compulsory vaccination, freedom violated!”, while another’s placard said: “Macron, no to the health dictatorship.” In Marseille, protesters held a banner depicting faces of politicians, including French President Emmanuel Macron with Hitler’s moustache. An estimated 1,500 people demonstrated in the French capital. In the southern cities of Montpellier and Marseille, authorities counted respectively 5,000 and 4,250 protesters. A number of far-right parties’ leaders joined the protest in the French capital. While a majority of French health care workers have had at least one vaccine dose, some are resisting the government’s decision to make vaccination compulsory for all staff in medical facilities.  The requirement for COVID passes for all restaurants, bars, hospitals, shopping malls, trains, planes and other venues is being introduced in stages starting Wednesday. Meanwhile, the French government announced tightened border controls starting Sunday, but also said it would allow in travelers from anywhere in the world who have been fully vaccinated.