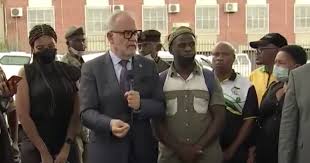 He was charged for illegally gathering outside Estcourt prison after former President Jacob Zuma was imprisoned for disobedience of a Constitutional Court order requiring him to appear and testify before the state capture committee.

Niehaus had been to Estcourt to express his support for Zuma.

In July of last year, he was arrested by police in the KwaZulu-Natal town of Estcourt while being questioned live on television.

Carl Niehaus’s case had been postponed since last month after his counsel applied for a discharge under Section 174 of the Constitution.

Advocate Nthabiseng Mokoena argued that the state had no evidence to present a strong case against her client.

On Monday the court ruled in Niehaus’ favour.

Niehaus said the state had no case, to begin with.

“And also relieved that this nonsense is over because it was a nonsensical politically motivated trumped up nonsense right from the beginning. And I’m glad that the magistrate was clear about it and threw the case out of court today”.

Niehaus is said that he plans to hold a media conference on Tuesday where he will announce his intention to sue the state for costs incurred.